Introduction to Japanese Sake (Nihonshu) and Sake Shops in Fukuoka

Posted on December 27, 2011 by findingfukuoka 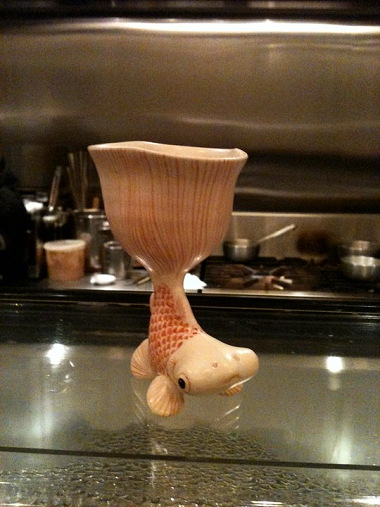 When it comes to alcoholic beverages, most people associate Kyushu with shochu, a type of liquor widely produced in the region (especially in southern Kyushu). However, in Fukuoka Prefecture (and neighboring Saga Prefecture), nihonshu has considerable popularity.

Nihonshu (lit. “sake of Japan”), usually known simply as sake in other countries, is a traditional rice-based liquor that has been brewed for more than 1,000 years in Japan. Notice I said “brewed”–despite the commonly used yet poor translation “rice wine,” nihonshu is made using a method that is more similar to that used beer than it is to wine. To start with, let’s take a look at the brewing process, a feat that requires immense amounts of skill and labor. 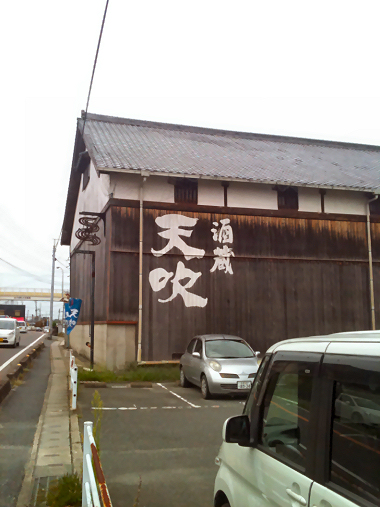 Amabuki Shuzo, a sake brewery near the Saga-Fukuoka prefectural border

It all starts with genmai, or unpolished, brown rice. Rice grown for use in sake is very different from that grown for consumption: the starches are concentrated in the center of the grain, and surrounding that are fats, minerals and proteins (in table rice, the elements are distributed more evenly throughout, giving the rice a more flavorful taste when consumed). Because the elements in the outer portion of the rice grain may degrade the taste of the sake, they are milled away, leaving (ideally) the starchy center portions of the grains. (Note that not all of these elements are harmful, and leaving some of them in sometimes creates a unique and pleasing taste.) Milling is a difficult and time-consuming process, and modern machinery is sometimes adopted by today’s brewers to increase precision and efficiency during this step.

Next, the rice is washed to remove excess powder created during milling, and then soaked to prepare it for steaming. Using ultra-purified water meeting rigorous specifications is key here, as the water the rice is soaked in will affect how it turns out in previous steps of the brewing process–certain chemicals found in most water will adversely affect the taste of the sake. After this, the rice is steamed (not mixed with water, but blasted with high-temperature steam) in as evenly a manner as possible, and then it is cooled.

Then comes what many consider to be the most important step in the process: the creation of koji, which is steamed white rice onto which koji-kin (a type of mold) has been cultivated. Only a portion of the rice is made into koji, and the process requires carefully controlled temperatures (the koji is made in its own separate room) and great precision. There are many types of koji-kin available, and the creation of koji varies from brewery to brewery, but it is widely agreed that the best koji is that made by hand, using minimal automation.

The next step is the creation of moto, or a yeast starter, which protects the contents of the fermenting tank from being ruined by outside bacteria. This moto, which has a high concentration of yeast cells, is prepared separately and then mixed in stages with koji, rice and water in a larger vat to ferment–this mixture, or mash, is known as moromi, and its volume is gradually increased through additions of koji, rice and water over a four-day period.

After fermenting, the moromi is pressed through a mesh filter to separate the sake from the solid rice particles that remain–there are various methods of pressing, including traditional methods as well as machine-automated ones. Following pressing, some brewers filter their sake by adding powdered carbon and running the resulting mix through a filter–this removes the amber color that often occurs (making it clear) and also removes certain undesirable flavors. Many brewers of high-quality sake today skip this step, as it is unnecessary if high quality rice and water are used and the brewers possess sufficient skill. Filtering may also remove certain characteristics of the sake that some consumers prefer to preserve.

After water is added to lower the alcohol content (which naturally reaches a level of nearly 20%), most sake is pasteurized to prevent it from spoiling. Some sake is unpasteurized (namazake), which creates a different type of taste, but it must be kept cold or its appearance and taste will change quickly for the worse. Pasteurization is usually performed once before storage (for aging) and once again before bottling, although namachozo sake is only pasteurized once (before bottling). 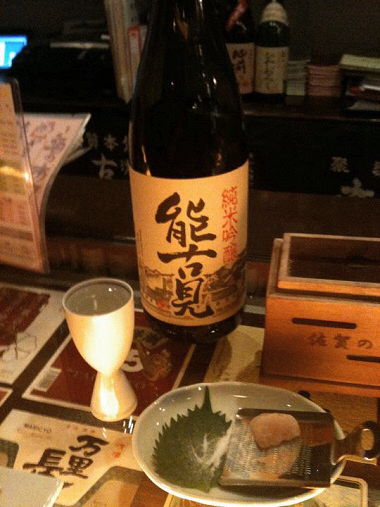 Nihonshu (Nokomi) and salt to be tasted along with it

The amount of low-quality nihonshu on the market is staggering, and most anything you find in the supermarket or convenience store is a nightmarish hangover-inducing mix of ingredients that I recommend you stay far away from. About 75% of nihonshu in Japan falls under the lowest category, futsushu (普通酒, “ordinary sake”), which is essentially sake that fails to meet the lowest quality standards (although there some passable futsushu). In other words, futsushu is the boxed wine of the nihonshu world.

Junmaishu (純米酒) is pure rice sake made using only rice, water and koji-kin, and whose rice grains (used in the brewing process) have been milled down to 70% of their original size or less to remove outer, contaminating layers (as mentioned above). Honjozo (本醸造) is sake in which a very small amount (strictly limited) of other liquor is added to the moromi before it is pressed. Adding another type of liquor increases yields, and it can enhance or lighten the flavor in various ways–even though it is not “pure” rice sake, there are many types of delicious honjozo on the market. In addition, honjozo sake must meet the same milling requirement (70% or less of original rice grains remaining) as junmaishu. Ginjoshu (吟醸酒) is sake in which the rice grains are milled to 60% of their original size or less, and daiginjoshu (大吟醸酒) is sake in which rice grains are milled down to 50% of their original size or less (some are milled to as little as 35%)–these types of nihonshu are much more difficult to make, and they are also the most expensive to buy. Junmai-ginjo (純米吟醸) and junmai-daiginjo (純米大吟醸) are ginjoshu and daiginjoshu made without the addition of other types of liquor–in other words, junmaishu that meets the milling requirements of ginjoshu and daiginjoshu.

Namazake (生酒) is nihonshu that has not been pasteurized, and namachozo (生貯蔵) is sake that has only been pasteurized once before bottling. Muroka (無濾過) refers to sake that is not filtered using carbon powder. Nigorizake (濁酒) is cloudy sake that has larger particles from the moromi remaining (by using a larger-holed mesh during pressing, or by adding some of the lees back into the sake after pressing)–nigorizake has a unique taste much different than that of regular sake. Genshu (原酒) is nihonshu into which water has not been added to reduce the alcohol content, making it a bit stronger than other types of nihonshu and giving its flavor more impact. Finally, koshu (古酒, lit. “old sake”) is aged sake, a type that most people have a hard time getting used. Koshu is usually darker in color and has a stronger flavor. 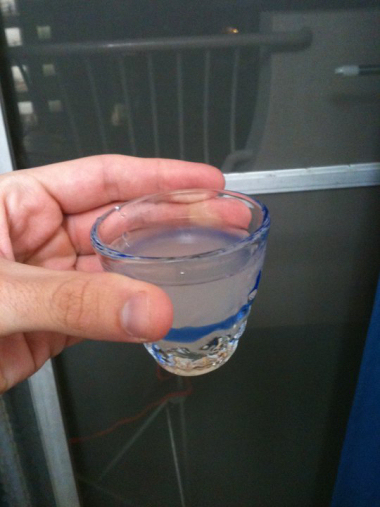 Japanese sake has a great range of tastes that varies depending on the brewery, the year it was made, the type of sake (see categories and terms above), and the skill of the brewers  involved in making it. Drinking nihonshu and discovering which types fit you personally is enjoyable and rewarding, and it is a unique experience in today’s Japan where traditional alcoholic drinks have declined in popularity, replaced by cheap chu-hi cocktails and generic-brand beers. Nihonshu can be enjoyed cold, at room temperature (for certain types), and even hot during the colder months of the year. One thing that differentiates nihonshu from other drinks such as wine and beer is its pricing: nihonshu is generally priced fairly based on the quality of ingredients and time spent making it, rather than being priced based on the fame of its maker, brand name or region.

Aside from enjoyment, there are many concrete advantages to drinking nihonshu. It contains a relatively high concentration of amino acids, which offer health benefits and also assist in the prevention of skin aging. Quality nihonshu (generally. anything that is junmaishu/honjozo or above) will not bring about bad hangovers. Like wine, nihonshu has health benefits if taken in moderation, and its highly purified water is said to be good for the body. Finally, some claim that it relaxes the body and mind more than other types of alcohol.

Nihonshu is one of Japan’s many traditions with deep historic roots that is being increasingly lost due to disinterest among younger generations. A recent boom in Fukuoka and other parts of Japan has caused a spike in the beverage’s popularity, but throughout Japan as a whole many people choose other types of drinks over nihonshu, and the ones who do drink nihonshu drink low-quality concoctions that don’t do justice to the refinement and richness of the traditional beverage. The vessels used for drinking sake are often pieces of artwork themselves, as presentation is just as important in drinking culture as it is in culinary culture in Japan. This is just one example of how nihonshu has deep connections with other aspects of Japanese traditional culture (in this case, pottery). An interest in nihonshu can lead to a deeper understanding of Japan as a whole. 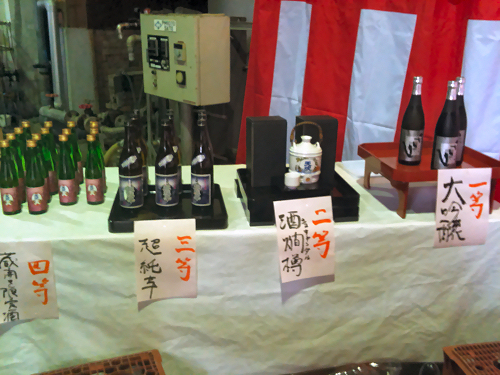 The following is a list of shops in central Fukuoka City where quality nihonshu can be purchased. I have ordered them based largely on my opinion of which stores offer the best selections.

Sumiyoshi Shuhan
http://sumiyoshisyuhan.com (Japanese only)
To my knowledge, this is hands-down the best place to buy sake in central Fukuoka. A visit to Sumiyoshi Shuhan will meet almost any customer’s nihonshu needs.
Hours: 9:30 a.m. to 6:30 p.m. (closed on Sundays)
Address (click for map): 3-8-27 Sumiyoshi, Hakata-ku, Fukuoka / 福岡市博多区住吉3-8-27

Liquor Shop Daito
http://www.daito-group.co.jp/ds (Japanese only)
This small liquor shop has a limited selection, but it is the best bet in the Yakuin area. It is also relatively close to Daimyo, where nihonshu is almost non-existent (except for a few bars).
Hours: 11:00 a.m. to 7:30 p.m. (open until 9:00 p.m. on weekends and holidays)
Address (click for map): 2-4-5 Yakuin, Chuo-ku, Fukuoka / 福岡市中央区薬院2-4-5

Iwataya
http://www.i.iwataya-mitsukoshi.co.jp (Japanese only)
Surprisingly, there are no good shops in Tenjin for nihonshu, so Iwataya is the best thing available. You can buy some decent Fukuoka-brand nihonshu here if you are in need, although prices are a bit steeper than usual. Relatively late hours even on weekends is a plus.
Hours: 10:00 a.m. to 8:00 p.m.
Address (click for map): Tenjin 2-5-35, Chuo-ku, Fukuoka / 福岡市中央区天神2-5-35 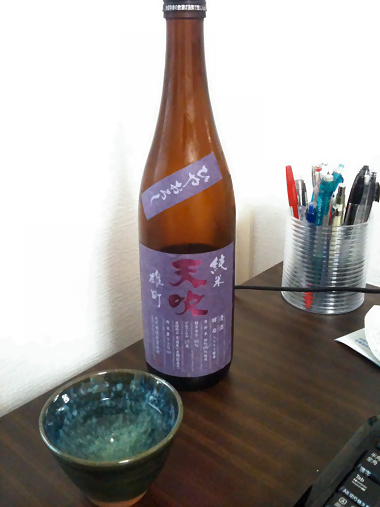 A bottle of Amabuki junmaishu (hiyaoroshi)

Note: I owe a great deal of my knowledge to my friends and acquaintances (including various bartenders) in Fukuoka. I highly recommend The Sake Handbook by John Gauntner (available at Amazon and Amazon Japan) as an English-language resource for anyone interested in learning about nihonshu.