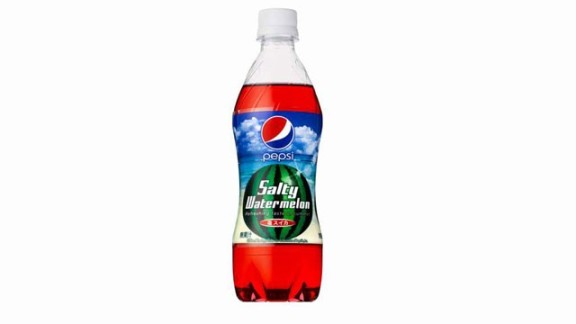 Continuing the tradition of unusual limited-time flavors (Pepsi Pink, Pepsi Ice Cucumber, Pepsi Azuki, Pepsi Baobab, etc.), Pepsi Japan has debuted its newest concoction for the summer: Pepsi Salty Watermelon. Although this may sound a bit unusual to consumers outside of Japan, over here it is actually quite common to add a dash of salt to bring out the flavor of the watermelon.

The drink itself is colored pinkish-red to resemble watermelon, a beloved summer treat in Japan, and the label features an image of white sands in front of a blue ocean a wide-open summer sky to invoke the exciting feeling of summer vacation (according to Pepsi’s Japanese website). This is complemented by the English catch phrase “Refreshing taste of summer.”

The drink itself tastes, at least to me, like regular watermelon soda, which is relatively uncommon in Japan. I couldn’t detect any salty flavor, although the ingredients listed on the back include salt. In the end, it’s surprisingly normal in comparison with the other odd flavors Pepsi has released in the past.

Pepsi was also smart in its decision to release this drink on July 24, during the midst of the hottest and most humid part of the year in Japan.

Pepsi also released a new drink earlier in the year, Pepsi Black (the color is basically no different than regular Pepsi), which I consider to be an utter failure. The amount of sugar was reduced by half and lemon flavoring was added to create a non-sweet Pepsi taste geared toward more mature drinkers, but in reality nobody wants to drink a barely sweetened soda. I couldn’t even finish a regular, small-sized bottle of this disgusting drink.

Whether they hit or miss, one thing is for sure: Pepsi Japan comes up with some truly unique and creative flavors for their popular cola.