Oyafukodori: The Street of Wayward Children

Posted on January 30, 2012 by findingfukuoka

Oyafukodori, the Street of Wayward Children

Oyafukodori (親不孝通り) has changed dramatically over time, and it is a place almost every local has an opinion on. Most people you ask will tell you something along the lines of “Oyafuko is dangerous–don’t go there.” But the dangers of the past have almost all disappeared, leaving an eclectic neighborhood struggling to find its identity again.

Oyafukodori Blvd. itself is only 400 meters (1,312 feet) long, extending northward from the north side of Showa-dori Blvd., opposite the terminus of popular Nishi-dori. Oyafukodori (often just called Oyafuko) can refer to the street as well as the neighborhood the street lies at the center of. Although not all parts of Oyafukodori have Tenjin addresses, the area is considered by locals to be the northernmost part of the greater “Tenjin” area,the commercial and entertainment center of Fukuoka City. 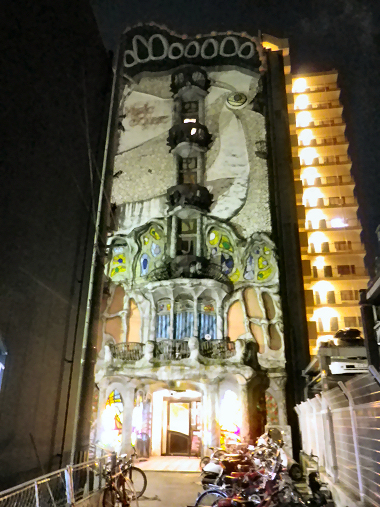 In fact, Oyafukodori has been a commercial center for hundreds of years, serving samurai patrons back in the Edo Period (1600-1868) and eventually students and young artists. Buses and streetcars used to run by the south end of the street, and two major prep schools (Kyushu Eisu Gakkan and Mizuki Gakuen) were opened on the north end. The combination of heavily used public transportation routes and students passing along the street on their way to the schools resulted in the opening of many business catering to young customers. A free-spirited youth culture developed, which was aided by low rents drawing poor students in their 20s to apartments in the area. Disco gained massive popularity in Japan during the bubble era, and Maria Club–the most popular disco club in Kyushu–drew massive crowds to the area. Other clubs and bars, karaoke parlors, restaurants, arcades, coffee shops and izakaya were opened, and street musicians and artists flocked to Oyafuko to express themselves and take part in this energetic culture. Starting in the late 1980s, Fukuoka’s first “foreign bars” catering to non-Japanese also opened in the area, two of which (International Bar and Off Broadway) are still in business today.

As you can guess, most of the prep school students weren’t attending classes very often, which led to the street being nicknamed “Oyafukodori” (親不孝通り) meaning “Street of Wayward Children” or “Street of Unfilial Children,” because the youth were skipping school while their parents paid expensive tuition fees. Unfortunately, gatherings of rebellious youth led to increases in crimes, which didn’t get better after the economic bubble “burst”–at this time, many businesses closed down or moved out, while fuzoku businesses (sex trade businesses, often dominated by gangsters) moved in, taking advantage of low rents. Violent crimes in the area gave Oyafuko its bad reputation, and because of that many people incorrectly assume the term “Oyafuko” refers to no-good criminal youth (another possible interpretation of 不孝, or “unfilial”).

The Anmitsu Hime theatre is one of Oyafuko's many unique establishments

The municipal government has attempted to improve the image of this northern Tenjin neighborhood by changing the kanji characters used to write the street’s name from 親不孝通り to 親富孝通り, which means just the opposite of the original name–“Street of Incredibly Filial Children.” Then they took down he former street signs and simply tried to erase references to “The Street of Wayward Children,” but the neighborhood’s deeply embedded history and unique culture ensured that the original nickname stuck.

Today’s Oyafukodori is at a low point: most popular nightlife and shopping is now centered in central Tenjin and Daimyo, with notable growth in Imaizumi to the south of Daimyo. In short, the Tenjin “scene” is gradually migrating south, progressively farther from Oyafukodori. On the bright side, low rents have drawn small shops to Oyafuko in recent times, and as far as the music scene goes it is still home to most of Fukuoka’s best nightclubs and live houses. There is a wide selection of bars in the neighborhood, too, including a large number of foreign bars. Oyafuko may have hit hard times, but there is still hope for its future.

The Wayward Children have all disappeared, as has the violence and crime, and in their place is a small group of people that still believes in the street’s magic. The steady pulse of Fukuoka can still be felt in this old northern-Tenjin neighborhood.

2 Responses to Oyafukodori: The Street of Wayward Children