Posted on July 4, 2011 by findingfukuoka

Ghost towns are powerful spectacles. Because built environments are strong symbols human life, it is disconcerting to see a town completely abandoned, thrown away as if it were nothing–a fully built urban environment completely devoid of the residents it once served. But not all ghost towns are alike, and at some point you may come across one that has a stronger, lasting impact, the kind that will still haunt you long after you have returned to the comfort of home.

Hashima Island is more commonly known by its nickname Gunkanjima (軍艦島), which means “battleship island” and originates from the island’s resemblance to a battleship (specifically, the battleship Tosa). The island is located in Nagasaki Prefecture, and it can be reached by boat from Nagasaki City. The island was developed by Mitsubishi as a coal mine, with residential and commercial facilities for the miners and their families living on the island. First populated in 1887, Gunkanjima reached its maximum population of 5,259 in 1959, and because it is only a 15-acre island,  it was more densely populated than Tokyo at the time (and also considered one of the highest population densities in world history). Gunkanjima played an important role during Japan’s period of industrialization and modernization, and was an important resource during World War II and the Korean War, but Coal was steadily replaced by petroleum from the 1960s onward, and Gunkanjima’s coal mine shut down in 1974. After being abandoned, the island was closed off for 25 years until 2009, when it was reopened for tours on limited parts of the island.

While visiting Nagasaki, my travel partner and I called in and made a reservation for one of the few boat tours going out the the island. It was winter, and when we arrived on the pier the weather was perfect and the morning air crisp and cool. We walked to the small dock we had been instructed to go to, and there was a tiny boat, bobbing unsteadily atop the choppy waves of Nagasaki Bay. This, of course, was our boat. 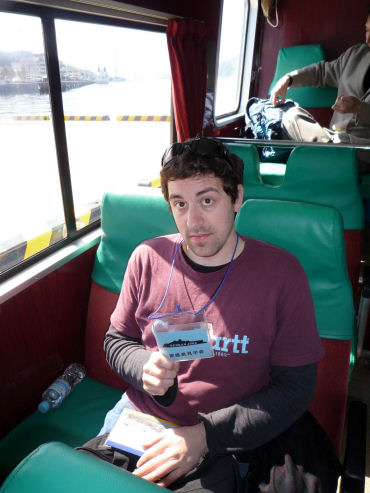 We received special visitors’ passes–only people on registered tours are allowed to set foot on the island, much of which is still considered dangerous because of crumbling buildings on the verge of collapse. Gunkanjima is, after all, an island town that has been abandoned for decades. As we made our way out toward the sea, we marveled at the giant shipping cranes and dock equipment squeezed into the cramped confines of Nagasaki Bay as a seasoned crew member leading the tour gave us explanations of landmarks we passed along the way–an old lighthouse, the first Western-style brick house in Japan, a popular hot spring resort island–followed by a primer on Gunkanjima itself. We were lucky enough to be blessed with a crew who not only took pride in Nagasaki, their home, but had a deep knowledge of Gunkanjima’s history.

Apparently the first western-style building in Japan (circled in red)

As the island came into view, people clamored out onto the rear and front decks of the little craft, watching as what appeared to be a battleship from hell loomed larger on the horizon. It was like gazing into the future, a post-apocalyptic city crammed onto a large rock. As we drew closer, the bare, cold concrete of utilitarian apartment complexes, towering high and packed so close together they almost touched, stared back at us indifferently. Some of the buildings were partially or fully collapsed, but some were in good enough shape that they looked almost inhabitable, resembling the cheap municipal housing still in use in smaller Japanese cities. After the crew brought us in close and circled the entire island to give us a complete look at everything, it came time to land and walk amongst the ruins themselves. 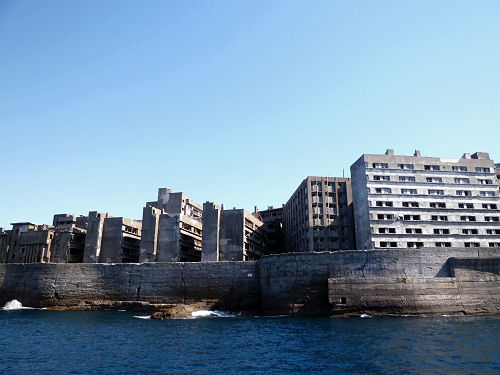 I went through the stone gate at the end of the pier and climbed the damp steps, only to be greeted by something truly surprising–utter destruction. I had expected the structures to be decaying and falling down, but it was as if a bomb had hit the center of Gunkanjima, toppling half of it and gutting many of its buildings. Our guide told us that this was because of typhoons, which had plagued Gunkanjima throughout its known history. Some of the first large-sized concrete buildings in Japan were built here, due to the harsh conditions demanding stronger building structures. Despite the massive amounts of protective barriers and walls placed along the shores, the minute people stopped living here, nature had come in and started tearing the place to shreds, bit by bit. One concrete apartment building was 95 years old, and the tour guide said it was expected to collapse any day now–for all I know, it may already be gone. 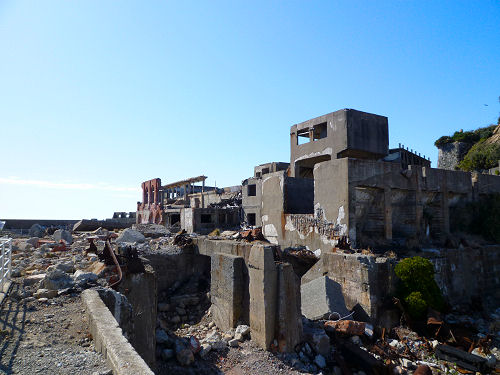 Even the buildings that were not hit by wind and waves had slowly started to fall apart, as if being forsaken by their tenants had robbed them of any further will to live. Yet there was still evidence of life, both in the good and the bad sense. As mentioned earlier, this was a coal mining island: Miners had to descend a terrifying elevator shaft to depths below the sea floor, where sweltering temperatures, dangerous work conditions, tunnels so small they couldn’t stand up, and frequent accidents meant deaths and injuries on a regular basis, not to mention ailments that made the lifespans of coal miners significantly shorter than those of other professions. Gunkanjima is also home to one of the darker stories of Japan’s imperial age: Koreans and Chinese were forcibly sent here to work the dangerous mines and live in miserable, unsanitary conditions. It is said that several people died in accidents each month. (Read Cabinet Magazine’s take on Gunkanjima for more information. It is a decidedly darker, more historical focus on Gunkanjima than mine, and well worth the read.)

But there was also a school, a department store, a market, a Shinto shrine, and a place for sports and festivals. Despite the lack of green space amidst the tangles of concrete, some housewives had spearheaded a project to build a rooftop park on one of the tall buildings to provide a more pleasant place for adults to relax and children to play. Video footage shown to us on the boat featured kids bouncing about the town, women shopping on Sunday for the latest fashionable goods shipped in from the mainland, and youths diving into the ocean from a ledge above a popular swimming area. As I walked around Gunkanjima, it was as if I could still hear the voices echoing off the walls. Thousands of people had lived, loved, and experienced every emotion on this tiny, solitary island.

The lasting impression I took home from my visit to the abandoned island was one of awe–at both the immense power of Mother Nature to reclaim what was originally her own, and at the shocking transience of human beings and their endeavors. No matter what we build, whether it be a tiny city on an island near Nagasaki or the massive capital of Tokyo, the second people stop living there, nature comes in to reclaim it. Winds and waves will topple down the sturdiest buildings, and without people to maintain and properly live in the buildings that make up a town, the entire place quickly decays and falls apart. Despite the tendency of human beings to become attached to material things, such things mean little in the end because they swiftly disappear (as do the people who once cherished them).

My visit to Gunkanjima prompted me to search deeper into my soul. It also forced me to discern more carefully between things with true significance, and things that may, like the 95-year-old apartment building, simply collapse into dust at any moment. 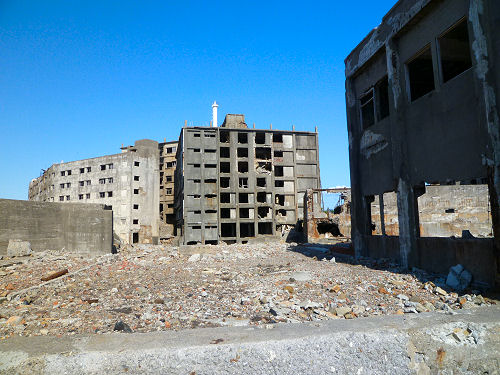 Note: Tours to Gunkanjima can be booked by phone through various companies, although you will most likely need some Japanese language ability to do so. If you are in Nagasaki, call or visit the local tourist information bureau and ask about tours running on the day you want to go, and they will provide you with more information. (Tourist information office staff often speak English, so if you don’t speak enough Japanese to make phone reservations, visit the tourism office in person.) We used a company called Seaman Shokai (株式会社シーマン商会; TEL: 095-818-1105), which was run by some of the most knowledgeable and hospitable guides I have ever had the privilege to meet. Gunkanjima is one of the most unique and amazing places I have ever visited, and it should be one of your top-priority destinations when visiting Nagasaki.